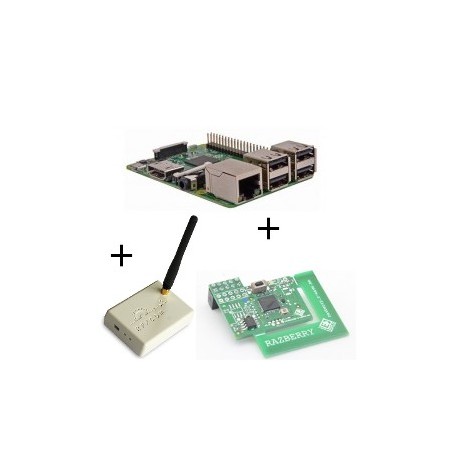 Raspberry Pi3 with card Z-wave Plus and Rfxcom

This product is no longer in stock

Raspberry Pi3 with card Z-wave Plus and Rfxcom.

The new Raspberry Pi 3 Model B+ is the latest product from the range Raspberry 3.

It is equipped with a quad-core processor 64 bit running at 1.4 GHz.

The wireless network connection dual band is provided with a certification of compliance modular.

The Raspberry PI3 B model connects to a screen or a tv via a HDMI and a keyboard.

The Raspberry Pi3 B model can be used for many applications, either for use as a desktop computer (spreadsheets, word processing, etc.), but also as media center (Raspbmc, OpenElec), player Squeezebox (SqueezePlug), PABX with Asterisk (Asterisk for Raspberry), but also server automation (RaZberry, Open Remote, Domoticz, JEEDOM, ...).

It is powered directly by the card Raspberry Pi .

Thanks to the expansion card RaZberry 2, you can turn any Raspberry Pi into a true box home automation compatible Z-Wave.

USB Interface to communicate with the hardware in the RF 433.92 Mhz.

The transmitter Rfxcom, you can connect it to a set-top box home automation or a computer to control devices in RF 433.92 Mhz, such as shutters SOMFY.

You can use the RFXtrx433E with software automation free as DOMOTICZ.

The list of supported products by the RFXtrx433E and the box EEDOMUS MORE.